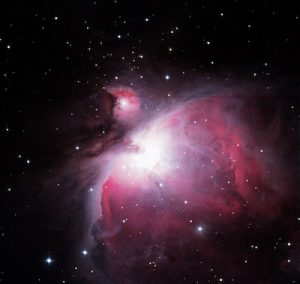 Formed this year, the Astronomy Club offers students an opportunity to delve into the far reaches of the universe by observing and chronicling the night sky as well as exploring astrophysics.

The two senior co-heads, John Matters ’22 and Teddy Sunshine ’22, started the club because of their shared interest in astrophysics, which studies the chemistry and physics of celestial phenomena such as black holes, dark matter, and the life cycles of stars. They recognized the value in having Milton’s Ayer Observatory available on campus and wanted to encourage more students to use it.

“We decided to start the club because we were both interested in the subject matter and we both have backgrounds in astrophysics,” said Sunshine, who has taken up astrophotography in the last two years. “I go out at night and take photos of both wide-angle and deep space objects and I’m able to display them to everyone. We’re trying to teach people the skills to do that. I got really into it through the pandemic and it’s become a real passion of mine and I want to teach other people how to do it as well.”

Matters’ interest in astronomy comes from a deep curiosity about theoretical physics and calculations about the measurements and movement of objects in space. Things like the properties of dark matter, which is believed to account for the majority of matter in the universe, remain theoretical—the possibilities are endless, Matters said.

“I’ve been interested in physics for a long time, and sometimes theoretical physics and astrophysics blend together,” he said. “Last year, I did a paper on the dark matter distribution in the Andromeda Galaxy. It’s the stuff you don’t see every day. It’s kind of magical and hard to comprehend.”

Both Matters and Sunshine, as Class IV students, took a micro-elective in exoplanets (planets outside of our solar system) and astrophysics taught by Science Department faculty member Jim Kernohan, who also manages the observatory. Matters credits Kernohan for sparking his interest in astronomy and physics.

So far, club meetings have attracted about 15 to 20 students. During a recent session, Matters and Sunshine led a discussion and activity about star death and black holes. Club members also have access to Slooh, a program for deep-space astrophotography; they can remotely control telescopes in Chile and the Canary Islands and use them to capture images hundreds of thousands of light years away from Earth.

Students interested in Astronomy Club meetings should watch their email for meeting times and topics of discussion as well as open observatory evenings.