New Director of the Mountain School 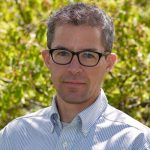 Alex Myers has been named next director of the Mountain School of Milton Academy, effective July 1. The following is a message from Head of School Todd Bland announcing Myers’ appointment to the Milton community.

I am excited to announce Alex Myers as the next director of the Mountain School of Milton Academy, effective July 1, 2022. A thoughtful search committee of faculty, staff, advisory board members and graduates of the Mountain School and Milton worked tirelessly throughout the school year to evaluate candidates from a broad national search. I have accepted the committee’s unanimous recommendation and am thrilled that Alex has chosen to join the Mountain School.

Alex is an English teacher, writer, and educator of students and adults. He has worked in high schools for 19 years, spending three years at the Community Schools of Naples, Florida, seven years at St. George’s School in Middletown, Rhode Island, and seven years at Phillips Exeter Academy. Alex currently serves as an English teacher, co-director for the center of teaching and learning, dorm head, and assembly program coordinator. At other points in his career, Alex has served as a writing center director and dorm parent while serving on numerous academic and other committees in educational settings.

Alex has conducted professional development work with educators over the years focused on issues related to diversity, equity, inclusion, and justice, with a particular emphasis on the LGBTQ+ community. During the summer, Alex co-leads the Summer Diversity Institute at Exeter, where he teaches a week-long series of courses on equity and inclusion covering topics such as race, sexuality, gender, and religion for teachers and administrators from a range of schools. Alex has presented on gender inclusion at conferences including the Association of Independent Schools of New England (AISNE), the National Association of Independent Schools (NAIS), and The Association of Boarding Schools (TABS). He has also worked with a number of schools—including Milton—around gender inclusion.

Alex is also an established writer. He is the author of several novels, nonfiction books, and essays. His works include the novel Revolutionary, a Lambda Literary Award finalist published by Simon & Schuster; The Symmetry of Stars, a novel published by Harper Collins; and Supporting Transgender Students, a guide for schools published by the University of New Orleans Press.

For all of the impressive reach of his work, what has emerged so powerfully in interviews with Alex and with people who know him well is how deeply and fully committed he is to the life and health of students, teachers, and schools. He is a “school person” at his core, finding as much joy in the hubbub of a dorm or the dynamics of the girls’ JV hockey team he has coached as in interrogating the pressing social and cultural issues that touch all institutions. In his cover letter, Alex expressed his great excitement about the prospect of leading the Mountain School in its “moment of transition, self-examination, and reimagination.” He also described his lifelong commitment to and engagement with land-based and experiential learning, from working summers as a wildlife interpreter for the US Forest Service, to conducting bird walks and canoe trips for the Massachusetts Audubon Society, to leading week-long backpacking orientation trips as head of the outing clubs in high school and college, to spending as much of his free time as possible hiking and tending trails in the White Mountains.

Alex received his undergraduate degree in Near Eastern Languages & Civilizations from Harvard University. He holds three master’s degrees: an M.A. in religious studies with concentration in ancient Judaism from Brown University, an M.F.A. in fiction writing from Vermont College of Fine Arts, and an M.A. in English from Georgetown University. Alex and his spouse, Ilona Tipp, and their two cats, Stella and Oberon, will relocate to Vershire, Vermont, in July.

I look forward to Alex joining the Mountain School of Milton Academy as its next director. Please extend a warm welcome to Alex as he joins our community.

From an early age, Visual Arts teacher Molly Swain loved “everything artistic and everything athletic,” so it’s fitting she grew up to teach art and coach sports.

“If you asked my kindergarten teacher what I would be doing right now, they would name those two things as their expectations,” she said. “I felt a natural path toward teaching, and coaching felt like a natural combination with teaching.”

Knowing that she didn’t want to sacrifice either her love for art or sports, working in schools made sense. She grew up in Cambridge, where her mother’s job in architecture and her father’s basement workshop meant that art supplies were abundant in her house, and she “always felt affirmed” as being a talented artist.

While Swain was working toward her undergraduate degree in painting and sculpture, she always planned to receive her master’s in art education. She came to Milton as an assistant coach for the girls’ lacrosse program in 2013, then returned in the fall as head coach and a teacher in the Visual Arts Department. “I’ve pretty much dramatically changed my role every year,” she jokes.

Prior to arriving at Milton, Swain taught art in public school, where art teachers felt the pressure of the “curriculum justification that exists particularly in the art world. There’s not enough of a budget. It’s constantly threatened with cuts, and that felt so distinctly different from what an independent school can offer. Here, I’m supported and really encouraged to be innovative.”

Today, she teaches Architecture—a course she designed—as well as Class IV Visual Arts; she is also a Class III dean, an assistant coach for girls’ lacrosse and JV basketball, and she serves on the Department of Equity, Inclusion, and Justice team. Architecture as an academic subject could be taught as a science, math, or computer programming course, but Swain’s class is specifically about the art of architecture.

“What is unique about an art course is that everything you’re making is inherently yours,” she said. “We’re designing from the ground up, trying to articulate what it is that they value, what excites them about space. How do you inhabit and exist in space, and then, what do you want to build to project those values?”

This year, Swain also took on the role of director of professional learning, a leadership position on the Teaching and Learning Team. She coordinates professional development and helps to organize faculty events.

“It’s exciting to me because I love talking about why we’re teaching what we’re teaching,” she said. “We were doing that before the pandemic but it feels even more important now. I think Milton does a good job of having that conversation and constantly examining it. My role is to facilitate a team of teachers who are doing that work and then to facilitate a broader, internal professional development.”

Swain is also one of the chairs of AWARE (Alliance of White Anti-Racist Educators), a K–12 group of white faculty and staff who meet to discuss topics of anti-racism and nondiscrimination and explore how whiteness and white supremacy culture affect their lives and work.

“These interpersonal connections with colleagues across divisions encourage so much learning and growth,” she said. “There are meaningful and challenging conversations that have helped me redefine who I am as a teacher, and to help students even without having all the answers. It’s about trying to navigate when to just listen and when to share, when to be a model of not knowing; how to create a space where students can truly be their full selves. It takes a lot of work, and I’m still working on it.”

Centre Connection, Milton's online newsletter for parents, is published five times each year through the efforts of the Milton Academy Communication Office and Parents' Association volunteers.