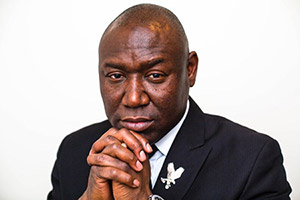 This year’s Alumni War Memorial Lecture will be delivered by Benjamin Crump, Esq., on Monday, May 16.

Listed amongst the Most Influential People of 2021 by TIME100, Ebony Magazine’s Power 100 Most Influential African Americans, The National Trial Lawyers Top 100 Lawyers, and named the 2014 NNPA Newsmaker of the Year, renowned civil rights and personal-injury attorney Benjamin Crump is often referred to as “Black America’s Attorney General.” Through his steadfast dedication to justice and service, Crump has established himself as one of the nation’s foremost lawyers and advocates for social justice, winning a number of record settlements and verdicts for victims and families that have faced injustice. He has worked on some of the most high-profile cases in the U.S., representing the families of Trayvon Martin, Michael Brown, Breonna Taylor, George Floyd, the residents of Flint, Michigan, who were affected by the poisoned water of the Flint River, as well as the family of Henrietta Lacks in a landmark reparations case. In 2021, St. Thomas University College of Law announced the Benjamin L. Crump Center for Social Justice in his honor, which will open doors for minority students pursuing law degrees. His 2019 book, Open Season: Legalized Genocide of Colored People, reflects on the landmark cases he has battled, and how discrimination in the courthouse devastates real families and communities. He is the founder and principal owner of Ben Crump Law.

Upper and Middle School students will attend the lecture, which will also be streamed as a webinar for our alumni and parent communities. Please use this link to register for the May 16 webinar. A recording of the lecture will be made available following the event.

The Alumni War Memorial Foundation was established in 1922 to honor those Milton Academy graduates who gave their lives in World War I. It was later expanded to honor graduates who died in World War II, Korea, and Vietnam. The Foundation supports lectures and events exploring the responsibilities and opportunities of leadership in a democracy and has invited to Milton prominent leaders in many fields.