A Thrilling Season (and Postseason) for Boys’ Varsity Soccer 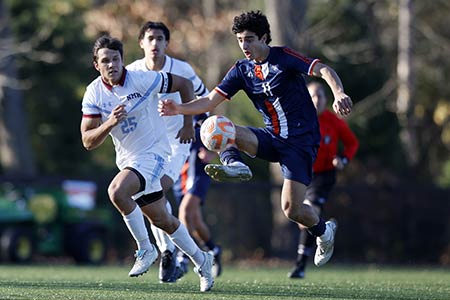 Up until their final game of the year—the New England finals against Worcester Academy—Milton’s boys’ varsity soccer team was not just undefeated: They had never been behind at any point in the season.

Crowned Independent School League champions after a 14–0–1 ISL season, the team’s overall 2022 record was 15–0–4. Going into the NEPSAC Class A finals, Milton beat Exeter 3–1 in the quarterfinal. Milton then beat defending champions Northfield Mount Hermon by penalty kicks to advance to the finals against Worcester. The match again came down to penalty kicks, but Worcester prevailed.

“The end of the season was really exciting throughout,” said head coach Chris Kane. “In the finals, Worcester scored a couple minutes in, but our group did a great job responding and scored a little bit before the end of half, then a second time just before halftime. We were up 2–1 going into the half. Worcester scored again before it went into overtime. We just came up short on penalty kicks but it was a great, fun season ending in a thrilling set of games, as close as you can get.”

Led by co-captains Mateo Buyu ’23, Jack Flowers ’23, and Nik Kathiresan ’23, boys’ soccer was the only Milton team to have a postseason showing this fall. Seeded No. 2, Milton was able to host the quarter- and semifinals on campus, which provided the players with a lot of fan support. In addition, the boys received a lot of love from alumni who had played for Milton (like assistant coach Chris Lewis ’15), several of whom helped out during the team’s preseason, making the squad feel like an extended family, Kane said.

“It was a fantastic season overall and I’m certainly so proud of the group for all that they accomplished and the way they went about it,” Kane said. “Not only did they improve a lot and grow throughout the season, they had a lot of fun. They brought great joy to what they did, great love for the game and love for one another. And they used that as fuel to keep getting better and play some fantastic soccer.”

Buyu was selected for the high school All-America East team, which will play December 10 in Panama City Beach, Florida. Kane was tapped to coach the team. The game will stream live at 1 p.m. Eastern Time on PrepSoccer.com.

View photos from the team’s win over Northfield Mount Herman in the semi-finals.