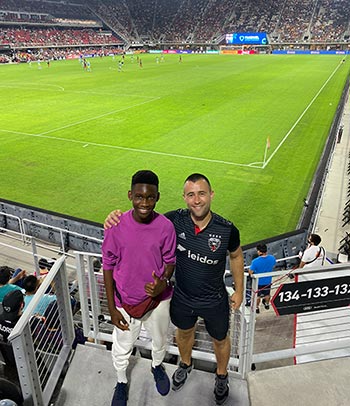 Every student’s path to Milton is unique. For Christian Kakhome, a new sophomore, his journey here started when he got to know alumnus Liam White ‘18, who was visiting Kakhome’s home country of Malawi. White is involved with Ascent Soccer, a soccer academy based in Malawi and Uganda that provides “opportunities for comprehensive education, critical life skills, and character development—combined with world-class soccer skill development.”

Outside of elementary school, Kakhome started playing with Ascent when he was 8 years old. As he progressed through the program, he started to consider attending high school in the United States. Ascent Soccer sponsors “global scholars,” student-athletes in their program who go on to attend U.S. schools. Six global scholars are currently studying in the U.S.

White, who was a soccer team captain at Milton, said he wanted to stay involved with soccer and international development after he graduated from Northwestern University. As a student there, he traveled to Malawi and South Africa as a trip leader for Woza Soccer. Today at Ascent Soccer, he handles operations for the U.S. nonprofit arm of the organization.

Because of the pandemic, Kakhome’s initial plans to attend Berkshire Academy fell through. At that time, White and Milton’s coach Chris Kane coordinated to have Kakhome apply to Milton. White serves as a mentor and liaison and was there to meet Kakhome when his plane landed in Washington D.C., where White lives. After a few days touring D.C. and attending a pro soccer game, White brought him to campus for those first few days. Today, Kakhome lives in Wolcott House and said he is really enjoying Milton, especially his English and math classes, although he is still adjusting to the weather. He is playing striker for the boys’ varsity soccer team.

“Christian has been an amazing addition to the Milton community and our varsity soccer team this year,” said Kane. “He embodies the values of hard work, selflessness, communication, inclusivity, and positivity which we aspire to build upon as a program and, even as a new student, has demonstrated leadership in setting an incredibly high standard for himself and those around him. Christian is already a great example of what this leadership looks like.”