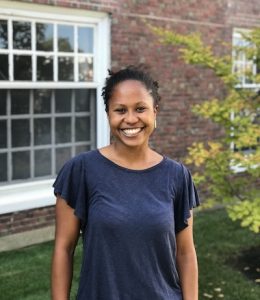 Leading a classroom of students requires teachers to always be “on,” said English teacher Rachael Abernethy. When harnessed effectively by educators, being on can reap valuable rewards.

“At once, you have the opportunity to impact so many people’s lives and be impacted by so many people in genuine and authentic ways. When you’re on, and you’re in step with your students, and you’re all working toward a shared purpose, it feels like you’re on a team,” she said. “I like working with people toward a shared goal. That feels healthy and good and kind and right.”

Abernethy, who joined the English Department faculty this year after teaching at La Jolla Country Day School in San Diego, teaches two sections of Class IV English—Perspectives: Genre and Culture, a Class III elective in which texts are grouped by genre and studied within their cultural contexts; and the Class II elective Reading Consciousness, an interdisciplinary study of literature, philosophy, and religion. Abernethy also lives in Robbins House and is an assistant coach for varsity girls’ soccer.

Born in Guam, Abernethy spent the early years of her life moving with her family—her father was in the United States Navy—and spent time living on the East Coast and in Spain before the family moved to San Diego. There, she attended an independent day school, where she held leadership roles in student government and athletics.

“The boundaries of the school day were permeable for me, ” she said. “I would get there early and stay late without really noticing because I was so happy to be there and to benefit from the community. I loved my teachers. I was so interested in who they were as people. As a student, I was shaped by the people around me and I loved that.”

Abernethy attended Amherst College as an undergraduate, majoring in Black studies. She received her graduate degree from the University of Pennsylvania, where she joined Penn’s Independent School Teaching Residency program and taught at Northfield Mount Hermon for a few years before moving back to San Diego. While at Amherst, Abernethy studied abroad in Havana, Cuba, just as the United States was resuming relations with the country.

“I wanted to study in a country that was both part of the African diaspora and spoke Spanish,” she said. “I didn’t know what to expect. Even though I was only 90 miles from Florida, I felt like I was in a completely different context with different rules and systems. It was extraordinary and it was really hard; I was more independent than I’ve ever been and had to advocate for myself in a new language.”

The Penn fellowship was a “period of discernment” during which Abernethy decided to become a teacher. “I choose to be a teacher every day, because I try to bring all of myself to my students,” she said.

Milton students are a stimulating population to teach, she said, because they are tuned in to “world issues or Milton issues at the most intellectual levels.” Most of them hold themselves to high expectations—sometimes unrealistic expectations—but they demonstrate a lot of compassion, Abernethy noted.

In addition to traveling, Abernethy is passionate about storytelling as a way to understand the human experience, and Milton felt like a good fit for that passion. “The exchanges between colleagues and with students is so much about sharing experiences and stories and making sense of them together. I believe deeply in the power of stories—what we can learn from each other and what happens when we find words to share our own truths and stories.”

Living in Robbins has been a good opportunity to know students beyond what they show in the classroom, and Abernethy said, “it’s humbling to hold someone’s concerns or joys and to be a person that they want to share those with.”

“My teaching style is relationship-based and energy-based, so every day I start my classes with a moment of silence and ask the students to bring their attention and intention into the room,” she said. “I try to imagine that I am bringing knowledge out of them versus imparting knowledge onto them. They have the capacity to learn whatever they want to figure out; my job is to teach them how to get there.”