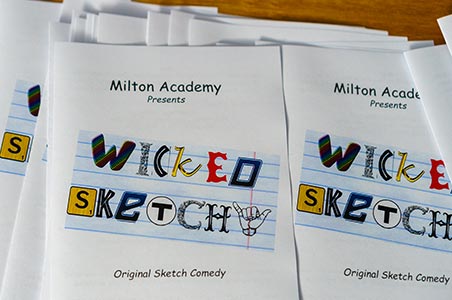 On the main stage at King Theatre for the first time, the fan favorite sketch-comedy show Wicked Sketchy will feature funny sketches and musical numbers written and performed by students.

First performed in 2014, Wicked Sketchy began as a 1212 play—a Milton tradition named for the former room in Warren Hall where pared-down, intimate performances were staged—giving students an opportunity to flex their comedy muscles. Last fall, the show moved to an outdoor tent to accommodate audience restrictions during the pandemic; for the first time, the show had a stepped-up production, said director and Performing Arts Department faculty member Peter Parisi.

“We were able to see the impact that lighting and sound design had on the show, and it just raised the stakes,” Parisi said. “It’s certainly evolved.”

This year, the show has about a dozen sketches, including some musical numbers. Students brought their ideas for sketches to the group, and together they fleshed out the ideas. Writing comedy is hard work, particularly for a show with a broad audience of students and adults.

“The questions are always: ‘What’s funny about it? And how could it be funnier?’” Parisi said. “We had a lot of ideas. Some of them went through zero iterations and were just ready. Others went through many iterations and will never see the light of day. We’re always working to make them funnier.”

This year’s 12 cast members are planning sketches that poke fun at pandemic hoaxes—during the bubonic plague—explore some Boston-area tropes, parody a game show, and perform a bee-based version of Hamlet. “It’s so silly, but it’s a lot of fun.”

Wicked Sketchy will run for three shows in King Theatre: Thursday, November 3 at 7:30 p.m., and Friday and Saturday, November 4–5 at 7 p.m. Tickets will be available for reservation online.