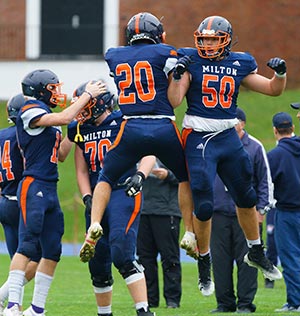 Football head coach Kevin MacDonald said the team started the season with the goal of winning the Independent School League, and they handily won the ISL championship after an undefeated regular season. Following an undefeated 2019 season, it was frustrating to have to miss 2020 because of the COVID-19 pandemic, but the pause in momentum didn’t affect this year’s team.

“Last year, we were loaded with talent, and we were thinking, ‘Wow, this is definitely a championship team,’ but we never got the chance to prove it,” MacDonald said. “So, it was nice to come back and follow up the last undefeated season with another one. Our goal was always to win the league, and we met it.”

The Mustangs’ postseason ended in a loss to Loomis Chaffee during the NEPSAC final game. Going in, MacDonald said, they knew Loomis was a formidable opponent, but they had faced—and defeated—tough opposition all year. Earlier in the season, Milton beat Buckingham, Browne & Nichols 25–13, despite BB&N being heavily favored to win.

“You want to play the best, so getting an opportunity to play the best prep school team in New England was not a bad thing,” he said of the Loomis game. “Our kids didn’t give up one iota. They played the whole game tough and hard, so I was proud of them.”

Captains Sam Jaffe ’22 and Jack Smith ’22 “did a tremendous job, especially considering they didn’t have the role-modeling that other captains would have, because we didn’t have a season last year,” said MacDonald. “They both worked harder than anybody else on the field and they were great examples to all the other players. They earned the respect of the other players. They’re both great guys, terrific students, and outstanding football players.” 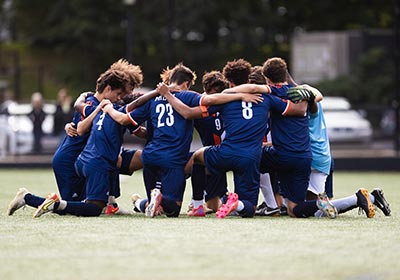 Senior leaders for boys’ soccer also elevated their team, overcoming the lost 2020 season and achieving a 13–3–1 regular season record, head coach Chris Kane said. They finished second in the ISL and made the NEPSAC Class A New England tournament, where they lost, 3–1, to Loomis in the quarterfinals. Captains Finn Hackett ’22, Zac Sardi-Santos ’22, Henri Richter ’22 and Luke Randolph ’22—along with eight other seniors on the team—rose to the challenge and upheld the team’s values of resilience and growth, Kane said.

“They didn’t have those passing-of-the-torch moments, and I think they lost a lot of the natural continuity that comes through culture and program, and yet we fought hard to maintain that,” Kane said. “This group has carried the culture of our program through COVID, while embodying these great values of resilience and growth. They’ve held themselves, and we’ve held them, to the high standards of our program to be hardworking and tough and competitive and positive and inclusive consistently.

“They’ve grown as leaders and they’ve grown as people, through some really challenging times,” he continued. “And they didn’t make those challenges an excuse to not reach for and achieve our high standards around leadership and accountability.”

Sardi-Santos and Richter were named All-American players, and were two of the six seniors honored as all-league players (Hackett, Randolph, Gavin Randolph ’22, and Wyatt Walley ’22 rounded out the all-league honors) this year. Despite losing in the quarterfinals against a tough Loomis team, Kane said, the seniors’ leadership kept the team energized and has also set the younger players up for future success; over the course of the season, 24 different players scored.

“Sometimes loss can be revealing,” Kane said. “I couldn’t have been prouder of the ways that our guys handled the moments of adversity in that game, and how much they showed that they were truly a team, and there for one another, and positive to the end.”

A particular highlight of the soccer season this year was their win against Nobles. Down 2–0 in the first half, Milton “owned the moment,” rallied, and ended up scoring six goals in the second, Kane said.

“It was an impressive, collective response and commitment to doing things better,” he said. “It was a sign of great leadership and understanding of what it means to be an effective team and how to get better, even in the moment.”