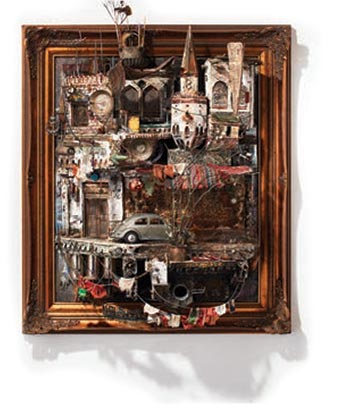 On Thursday, November 4, Milton’s visual arts department will host an opening reception for the latest Nesto Gallery exhibit, Home, by architect, artist, and Middle-Eastern visual commentator and critic, Mohamad Hafez. A Syrian-American artist and architect, Mohamad Hafez was born in Damascus, raised in the Kingdom of Saudi Arabia, and educated in the Midwestern United States.

“Expressing the juxtaposition of East and West within him, Mr. Hafez’s art reflects the political turmoil in the Middle East through the compilation of found objects, paint, and scrap metal.” says Visual Arts Department Chair Ian Torney.

“Using his architectural skills, Hafez creates surrealistic Middle Eastern streetscapes that are architectural in their appearance yet politically charged in their content. Responding to the atrocities of the Syrian war, Mr. Hafez’s recent work depicts cities besieged by the civil war to capture the magnitude of the devastation and to expose the fragility of human life.

“However, in contrast to the violence of war, his art imbues a subtle hopefulness through its deliberate incorporation of verses from the Holy Quran. At the core of Hafez’s work, the verses offer a distinct contrast between the stark pessimistic reality of destruction and the optimistic hope for a bright future.”

Through the generosity of the Melissa Dilworth Gold Fund, Mohamad Hafez will conduct workshops this week with Milton’s art students. Parents are invited to the opening reception for his show from 5 p.m. to 7 p.m. on Thursday evening in the Nesto Gallery—located on the lower level of the Art and Media Center. His exhibit will run in the Gallery though December 17.