Centre Connection > The Old Man and the Old Moon

The Old Man and the Old Moon 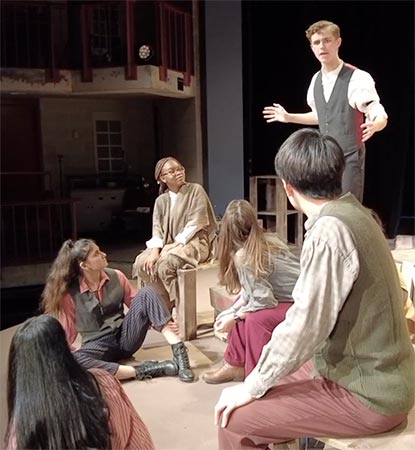 Just in time for Family Weekend, this year’s Class IV play, The Old Man and the Old Moon, will take audiences on an epic quest. Directed by Performing Arts Department faculty member Eleza Kort, the “play with music” tells an adventurous folktale about the stages of the moon.

In the story, the Old Man charged with taking care of the moon abandons his duties and takes to the sea—throwing the world into chaos—when his wife is lured away by a mysterious song. His quest brings him encounters with storms, sea monsters, and ghosts, “as well as the fiercest obstacle of them all: change,” according to the show description.

“It’s a fun show,” said Kort. “There are projections, there’s interesting storytelling, there’s adventure, there are some sweet, tender moments. It’s a really great story. The characters are big and exciting to play, and the cast can play multiple roles, and it’s a very accessible plot.”

Tom Tang ’26 plays the Old Man, and said working on the show has helped him to embrace the present.

“It forces me to step into the shoes of another person,” he said. “The most challenging part has definitely been memorizing my lines, but Ms. Kort reminds us that acting is reacting. By actively listening during rehearsals, my lines come naturally to my mind as appropriate and logical reactions.”

The Class IV production is an opportunity for Milton freshmen to learn about the school’s theater program. Some of the students have had experience with acting and tech before, but others are making their drama debut, said Kort. The Old Man and the Old Moon has a cast of 11, in addition to a tech crew of about 10 students. Though not a musical, the show features folk songs.

Carmelle Jagaselvan ’26 plays a chef named Cookie. Learning the script and remembering the stage blocking have been good challenges as the cast and crew prepare to open the show.

“I’ve enjoyed working and getting to know the other people in the cast and crew over the last few weeks,” Jagaselvan said. “People in the Milton community should come see the show because it’s an interesting and captivating story, and we put a lot of time and effort into the performance.”

Tang said the music in the show is a “delight” and the efforts of the cast and crew make it a great performance.

“Our play conveys an important message that encourages all of us to take risks and step outside our comfort zone occasionally. I genuinely believe that this is something we all need to hear.”

The Old Man and the Old Moon will have two shows: Thursday and Friday, October 20–21, at 7:30 p.m. in King Theatre. Tickets can be reserved online.